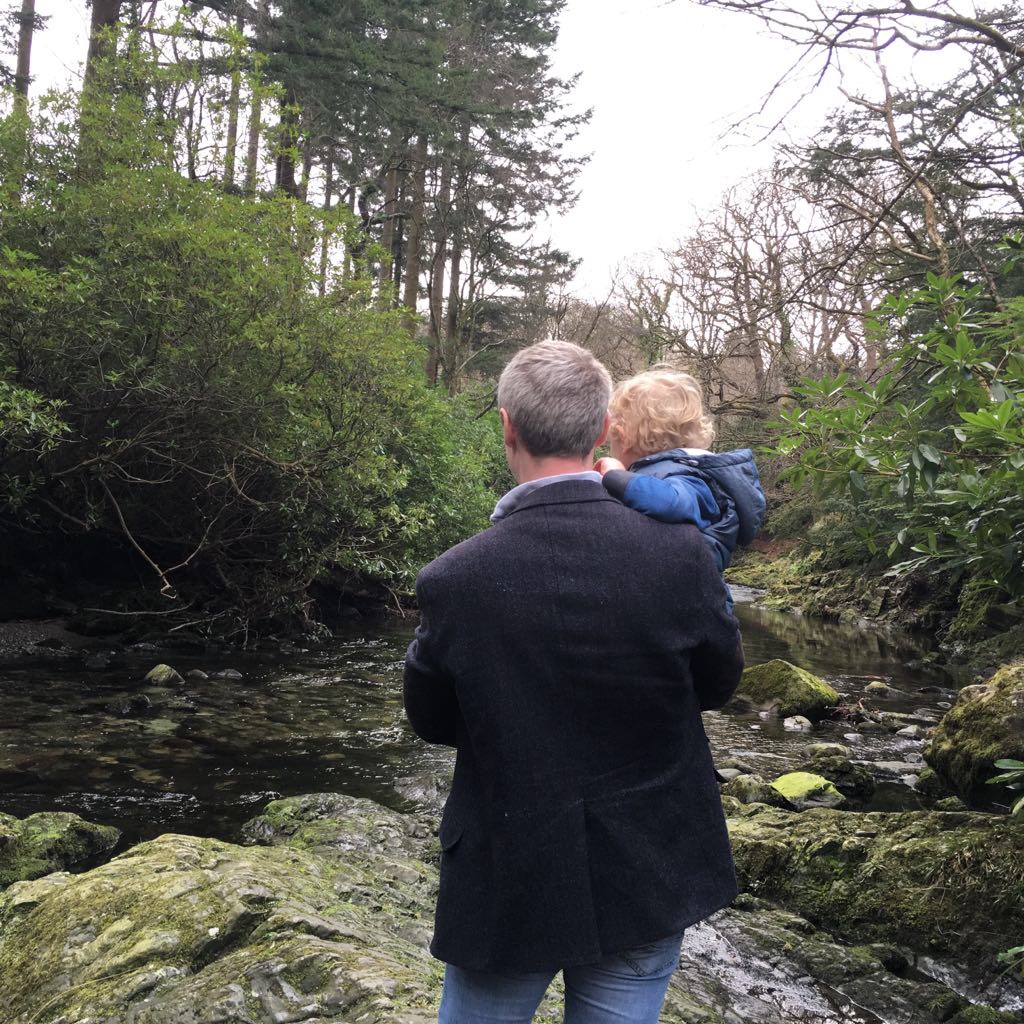 I hold a weary arm up to protect my eyes from the sting of a weakening watery sun which is sinking into a coppery sky.

My son is jumping in the garden, playing some imaginary game known only to him. His golden hair plastered across his forehead like wet grass. Anyone can see he is tired. Anyone apart from my son.

I’ve already let it go on longer than I should have. Sometimes it’s hard to let go of a special day.

I begin the process by calling out to him. He pretends not to hear. I let it go a couple of minutes and then do it again with the same result. I move towards him. Still no acknowledgement, he’s concentrating on two toy cars, one in each hand.

I move towards him and, although pretending not to see me, he darts away as I get close. I entertain the game for a short time, enjoying his manic giggles as I chase him around the garden.

Soon I have to lift him. He goes through the motions of roaring at me and swinging his arms but I can feel the exhaustion seeping out of his limbs and I know his heart’s not in it. His growls soon soften and he rests his burning cheek against me and we go upstairs.

I know I should really bath him but it’s late and we’re both weary. I settle instead for washing his face, hands and arms and brushing his teeth. He gets a new jolt of energy as I’m undressing him and we play-fight on the bed for a few minutes.

I help him with his pyjamas. I know he can do it himself and I know I should let him but there’s a comfort for both of us in doing it together. He asks where mummy is on several occasions as I read his book of choice. His mother and I almost always try to both be present for the nighttime ritual, as if it holds some sort of secret, mystical importance. We both hate not to be there at the end of his day. However, there is the rare occasion where one or other has to be away. Tonight she is working late.

My son is lucky to have a wonderful mother, always kind and caring and forever putting the needs of others before herself. Her calm and supportive parenting is the perfect foil to my often chaotic and rambling incoherence. My son rightly worships her.

I feel a stab of jealousy and don’t like myself for it.

My son wants to sleep in our bed tonight. Not an uncommon request which I go along with. I suspect I probably should encourage him to go to his own bed. But then he’s my boy. My only child. I know it won’t be too many more years until he won’t even want to sit in the same room as me and will think the guy who pushes the trollies around the Tesco carpark is cooler than his daddy. If he wants to sleep in our bed then that’s just fine with me.

I take off my shirt and cuddle in beside him. He puts his face against my chest. There’s an unspoken intimacy in his skin against mine, a link which goes back to when he was a baby and I had to get up in the middle of the night to feed and wind him. Then he was so small that he could fit in the palm one of my hands and he would rest his soft little head against my shoulder. It made me feel that I was his whole world.

Soon he is asleep, snoring softly, moving around the bed like a drunk man. I could leave him now, go downstairs to watch TV, surf the web or check in with people I don’t really know on social media. I decide to stay and watch my son sleep.

As he murmurs quietly I can’t help but wonder what’s going on in his head. What dreams and fears are trying to form which he doesn’t yet understand? His pale skin is slightly illuminated by the soft bedside lamp and as I watch I’m so in love. The tantrums, questions, demands, insults, slaps and the early mornings all feel gloriously inconsequential.

Now, like this, with his thin chest rising and falling, I want time to stop. I want to throw something around him to protect him from the journey we all must take. I feel that I couldn’t bear it if he were to ever suffer or be unhappy like I was. I feel that I want to take all the pain in his life and absorb it into my own body.

He turns over, his twig-like arm reaches out, as if searching for something. It comes to rest on my stomach and a little bit of his warmth of his hand transfers into me.

I know I’m being selfish. I know to even think about denying anyone any aspect of their journey is the worst sin.

People often tell me I’m a good daddy. Good because I care so much, do so much, put so much of myself into it. But here, as the last of the evening light disappears like a snubbed candle, I don’t feel that way. It’s always at night when you are least certain, when the doubts attack your mind like hungry crows. I wonder if other parents get these thoughts.

I do what I do because I want to feel needed. I want to feel that he depends on me entirely. I need to be part of everything that he is and does and will be. What’s one of the hardest parts of parenting? Letting go. Letting go that little bit more every time the sun rises.

He doesn’t fit in the palm of my hand anymore and I don’t feel like I’m his whole world now. But I’m still his daddy.

Tiredness is coming on me now like the returning tide and I sink down into the bed. I put an arm around him and he moves in close. We’re protecting each other. We’ve got plenty of time. Jonny McCambridge is a daddy, writer and blogger from Hillsborough. After being employed in an office as a journalist for 20 years, Jonny decided to give up full-time work to help look after his son and to pursue his writing ambitions. His blogging has brought both of these loves together. Giving up work has left him financially poorer but emotionally richer and he describes it as the best decision he ever made.

Find Jonny at his blog What’s a daddy for?