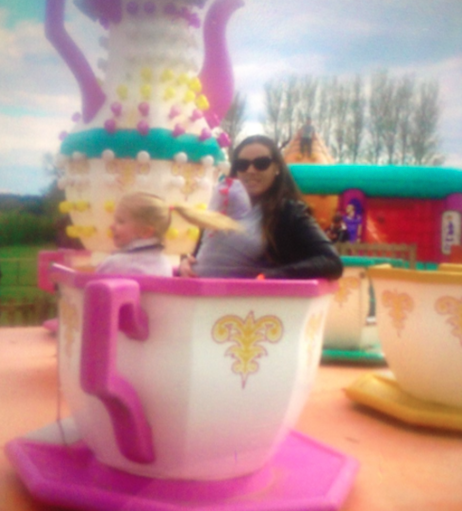 ‘Will you stop being so silly?! Other people can do this just fine!’ ‘You’re being pathetic!’ I heard this and other negative comments quite a lot but the worst person for giving me abuse and making me feel useless was me. There wasn’t anything anyone could say that I hadn’t already told myself. If I wasn’t hating myself I was worrying about everything.

I was 20yrs old when I gave birth to my daughter. My world felt like it had been turned upside down, everything I was knew was quickly disappearing and I had to adjust to this new life of being a mum. I had been so scared to tell people about the pregnancy my partner and I hid it for 30 weeks. A handful of people we considered friends knew but that was it. I guess this is when the anxiety really kicked in. There had been occasions where I had felt panicky and nervous before but not on this scale. There were so many ‘what if’ questions flying around my head ‘what if everyone hates me? What if I’m not a good mum? What if I can’t cope? What if I end up being kicked out of home?’.When we did eventually tell people, I’d like to say it got easier but it really didn’t. I left University, had to leave home, lost friends and became the subject of gossip. My partner was supportive through all this but it I still felt so alone. I have a ‘severe’ needle phobia too. This posed a massive problem as I kicked up such a fuss about blood tests. It’s not that I didn’t want to do it, it was because I couldn’t. I’d scream, cry, couldn’t breathe, shake, felt faint, throw my arms around even punched a nurse once. I refused to consent to a blood transfusion if I needed one as death seemed a better option than having a needle. No one took me seriously though. They all thought I was ‘just being silly many people don’t like needles, just don’t look’. It wasn’t a case of ‘don’t like’ it, wish it was It would have been so much easier. I hated myself. I wasn’t offered help no one looked in to what was going on with me and I felt totally useless and pathetic. I didn’t attend my daughter’s injections and when she was admitted to hospital with suspected meningitis I had to stand outside while they took blood from her. I felt like the biggest failure ever, cried many times to people over the years about it but not one person really listened to me. In March 2015 I found out I was pregnant again. My 3rd pregnancy as my 2nd had sadly ended in a miscarriage 2yrs previously. ‘I’m going to do this right this time!’ I really tried. I went to the Dr early and got booked in with the midwife and all was great until she mentioned blood tests. Anxiety was already quite high from hoping my pregnancy would be ok this time but the mention of needles was way too much. I then spent up until September that year crying most days because I knew I was annoying the midwives with not having the blood test, I knew they didn’t realise what it was doing to me and the anxiety and ‘what if’ questions were getting louder and more frequent in my head. They would keep me up at night and the nights I did fall asleep I’d wake up in a sheer panic convinced something was wrong. ‘What if I’ve harmed my baby by not having a blood test? What if they stab me with needles? Will my baby be ok? Will I be ok? What if this happens? What if that happens?! I can’t do this!’ I’d have panic attacks absolutely convinced that I would faint and someone would call an ambulance and they would stick needles in me. During an attack I feel like things aren’t real, like I’m abit disorientated, my heart feels like it could explode and my breathing is short and quick. It is unbelievably terrifying!

One day I met with our new health visitor, she actually listened to what I said and took me seriously. She said she would pass my details on to the perinatal mental health team. I honestly didn’t think anything would come of it but Dr B got in contact and is still helping me today. She is truly incredible. She told me I’m normal. The worries I have a lot of other parents feel the same and sometimes we all need somebody and that’s ok. Doesn’t make you weak, doesn’t mean you aren’t capable just means you’re dealing with more and there’s no shame in that. Turns out my phobia and anxiety stems from a traumatic past experience but trusting Dr B and learning how to be kind to myself I am making improvements. I know it is ok to think and feel these things on a bad day, because that is all it is, a bad day not a bad life. I still have days where I panic my son sleeps too long or my house is a tip or something bad will happen but I don’t know what that something is. It’s normal, I’m normal and you’re normal. Don’t ever feel alone, there is always someone who wants to listen to you and people do care about you.

You can get in touch with Sarah and find out more about her on Twitter @Sarah__Jane_H or on her blog http://breathebelievebegin.blogspot.co.uk

One thought on “Sarah’s PND Story”