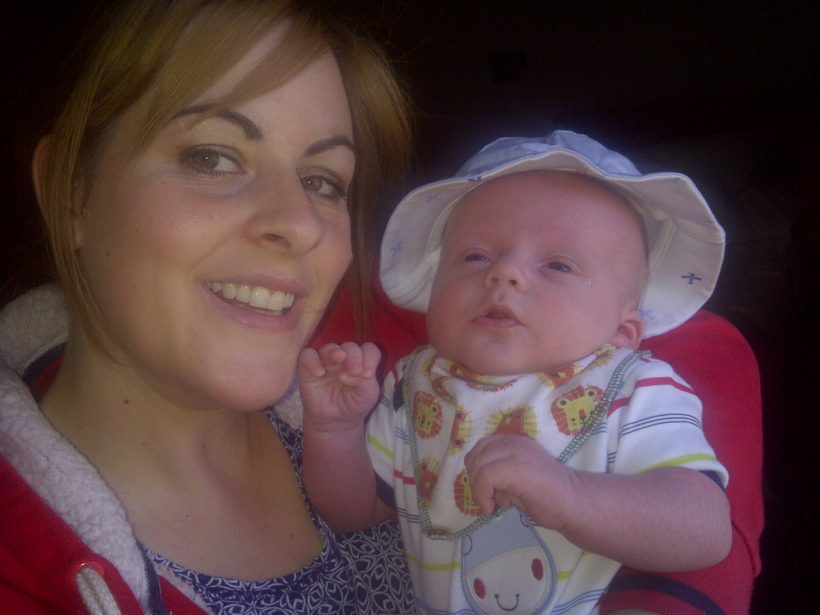 I fell pregnant with our son in 2010 and had quite an easy pregnancy, we were very excited for our new arrival and had bought all the usual baby stuff and eagerly awaited our sons arrival. My mental health was also very good although five years prior I had suffered a breakdown where I was sectioned in a psychiatric ward for a week. I had wrote this on my notes to which the midwife at my appointment said she didn’t need to refer me as I had been well since. My husband didn’t feel right about it and thought it would have been good to speak with someone but I disagreed as I felt well and didn’t even know about Postpartum Psychosis or that I was even at risk of it.

My labour was intense and quick and our son was born in August 2011. He was beautiful, with fair blonde hair, I was elated and so happy. Physically I was weak and my blood count low but I was discharged with iron tablets. I didn’t sleep at all in the hospital and by the time I got home it was the same, I couldn’t nod off and actually felt fine, as if I didn’t need sleep, I was breastfeeding so I was kept busy but my family started to notice the strange comments I was making.

We are Christians but I kept bringing God into every conversation, I felt so happy he had given us our baby but I started to believe we could tell people about God being real through our son. I was very weak physically and I was advised by the doctor to go back in for a blood transfusion. By this time the thoughts in my head about God continued to race, but they got scarier,for example I thought if I let go of my husbands hand he would die so started squeezing it tight, also the patients and visitors on the ward were somehow locked in heaven and hell, it was all pretty frightening.

Our tiny boy was crying for food but I couldn’t concentrate to feed him, it was advised I offered formula but I felt it was like poison for him. He eventually had it because I was unable to feed him and I found this very hard to deal with. The midwives arranged for a psychiatrist to see me, he told me I had symptoms of Postpartum Psychosis whereby some mums after birth experience a psychotic episode and he recommended I stay in their mother and baby unit.

I didn’t believe I was ill and asked again why I couldn’t go home, he said I would be a risk to myself and I could have treatment and support in the unit, and that our son was able to stay with me. I was so sad, there were other families around us, balloons and gifts at the ready, taking pictures of their little ones and there was me going off to a mother and baby unit, my husband going home alone. We were admitted and had to stay there for 5 weeks, my husband saw us every day as well as family and friends.

The recovery at home however took months and months with medication changes and I had high anxiety over everything. Even feeding our boy his bottles gave me such panic, what if he didn’t finish it all etc and I couldn’t sit still very much. But as he hit 6 months old things began to look up, he was becoming my little playmate, giggling and cooing and somehow we all got through. We moved house when he was 10 months and I fortunately made some great friends at the local toddler group which included my friend Angela who had suffered from PP herself, she had never met anyone else who had it so we had a close bond from the beginning.

I fell pregnant with our second son and he was born in 2014, again with a mop of lovely fair hair! This time round I was under the care of the psychiatrist and had been on medication throughout the pregnancy. I was highly anxious after having our son with what had happened before, the psychiatrist saw me and informed me there were no bed available in the mother and baby unit. The plan had been that I had a preventative stay in there for the team to monitor how I was, but the ward was full so I had to go home with visits from the psychiatric team.

There was another unit an hour away but we felt it would be too far for my husband and son to travel. So home I went, I was given sleeping tablets and anti psychotics so I was pretty sedated but I was still anxious that I was going to be ill. A few days in, the worst happened and I got so ill I was unrecognisable, believing a truly awful story that wasn’t at all true but was very real to me. My husband rang the team and drove me himself to the psychiatrist, I actually wouldn’t even get in the car as I didn’t want to be with him as he was telling me the story wasn’t true. I was then taken to the hour away unit with our son in which we stayed there for a week and then got transferred back to Glasgow for 9 weeks. My husband and older son visited daily and again so did family and close friends. It was a hard time and I missed my family terribly. There was a wonderful nursing assistant who knew the evenings were hard for me and gave me a relaxation face massage to help me unwind. The second time round I felt my recovery was quicker, although there were still difficult long days with a toddler and baby to care for.

The boys are now 8 and 6 and life is so much better, I still get anxious at times but thankfully PP is behind us and we have been able to put this firmly in the past. There is still a lot of stigma around this illness especially in the light of it being an emergency if someone is suffering with it as you can be so unaware of what is real and what is not.

Thank goodness this is something you can recover from with medication and support. I would say to any woman who is struggling during or after the pregnancy to seek immediate help and you will recover, I promise.