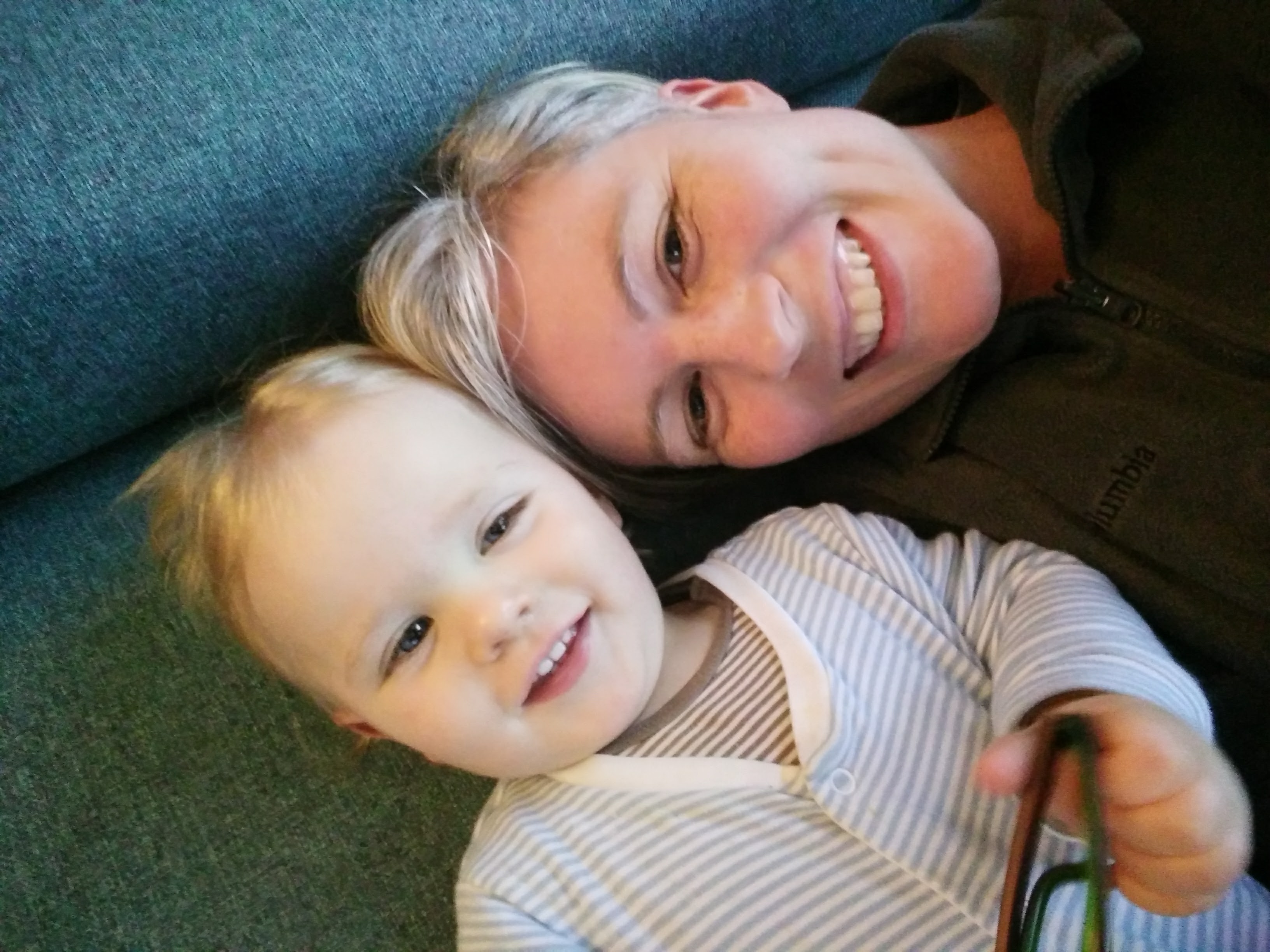 Postnatal Anxiety -“I didn’t even know this was a thing!”

This is not a story about postnatal depression. I know that because after the new baby was born in October postnatal depression was all that anyone asked about. The midwives, the health visitor, the GP. ‘How’s your mood been?’ ‘Have you experienced any low mood at all? Bouts of crying?’ I knew that I had not and told them so and they ticked their box and moved on. What I didn’t feel able to tell them was that, despite having a new-born baby and being exhausted constantly, I hadn’t been able to fall asleep in weeks. I had racing heart palpitations at night, crushing tightness in my chest, episodes of sweating and shaking, nausea and irritable bowel, in simple conversations my brain would scramble about desperately for words that should have been on the tip of my tongue but seemed locked out of use. So no, I didn’t have postnatal depression but I did not know what on earth was happening to me.

When these things come upon you they creep, they definitely creep. So that it’s only when you can’t recognise yourself that you even know it’s been happening. For me it came to a head in mid-January last year when my eldest, aged 4 and ¾ came home from school complaining of an upset stomach and I responded by having a panic attack. Fear of vomiting, or emetophobia to give it its proper name, is an old phobia of mine that used to be extremely debilitating but which had been completely under control for a number of years. On that particular night, as I had to ask my husband for permission to shut myself in my bedroom while he dealt with the poorly child, I was devastated to realise that just 6 months earlier I had spent a night catching her sick in a basin and rubbing her back and nothing like the wreck I suddenly felt. So I started to put some pieces together and retrace my mental health journey that had in such a short space of time brought me so far from my best self.

One word started to flicker and flare into life – ANXIETY. Anxiety had somehow crept into my psyche and was now saturating every part of my day to day. Working backwards to figure out when things had gotten so bad I started with the recent resurgence of my emetophobia and panic attacks triggered by the dreaded vomiting bug season. Christmas before I had kids used to actually be fun! Now that I have a small person in one of those overheated germ incubators they like to call ‘school’ the holiday season means just one thing – the inevitability of the tummy bug and just waiting for the moment when it will visit your door. So since the first of my mummy friends gave me an exhausted look at the school gates one Monday morning in early November and croaked ‘we’ve all been puking all weekend’ my stress levels had been elevated. But why was I so completely unable to cope with this now when 6 months previously I’d been a one-woman coping machine? I needed to unravel a bit further back.

The next thing my reflections settled on was the tightening in my throat every time someone, making polite conversation about our newest addition to the family, trotted out the line ‘Oh it’s so much easier second time around’. ‘No!’ I wanted to scream. ‘It is not. The first time was a breeze compared to this!’ What I actually said were things like, ‘Yeah in lots of ways it is but I’m a bit more of a worrier this time, not sure why.’ One thing that had been much harder with this baby was feeding. I had pain and cracked nipples and blocked ducts and all the things I had somehow managed to escape first time around. And then at around 6 weeks he started projectile vomiting. I know all babies boak, and for an emetophobe I’m remarkably unperturbed by milky baby sick. But my tiny, fragile little bundle started to hurl his feeds out of himself with huge violent wretches, covering everything, emptying himself of all the goodness I had just spent hours putting in. It started happening once a day, sometimes twice, eventually 3 times, and I googled and worried and asked friends for ideas. Feeding times became a tense ritual of spreading towels everywhere, listening nervously for the tell-tale tummy gurgles or gulps that usually meant he was about to blow.

There was the day my Facebook status update simply read ‘Today in parenting the baby projectile vomited into my mouth. I can’t even.’ Although he didn’t get upset when it happened he was clearly exhausted afterwards, his little body spent and his eyes glazed. After one eruption I held him especially close, chest to chest, his head pressed against my cheek, sat down on the bottom stair and sobbed. After 3 weeks I finally discovered the problem was oversupply and it was quite easily resolved by switching to another style of feeding, but something in me had been broken a little bit by the experience. When I looked at my little bubs I felt like he was a different baby to the one I brought home from the hospital. Our early days of cosy snuggly feeds, falling asleep with him nursing had been replaced with worry and fear that had taken up residence in my mind and my relationship with him.

I could definitely trace the development of my anxiety back to this 3 week period as the point from which it became something I couldn’t contain, spilling out into all my relationships. At this point my thoughts were quite dark. When I looked at the baby I sometimes felt like he would be snatched away from me. My mind came up with phrases like ‘you won’t have him for long.’ On a rainy road trip to Fermanagh I became so convinced I was going to crash the car that I had to swap with my husband, hands and heart trembling. My daughter’s mood grew quite low and it seemed like she was feeding off my negative energy. I saw my own fear reflected back in her eyes as she tried to figure out what was wrong with mummy. I was overly irritable and short tempered with my husband as I had so little emotional energy. With friends I found I either worried that I had nothing to say or I said too much, all filters lost in the mush that my brain had turned into. From this point I had entered into an experience that could only be described as mental ill health.

But the roots of it go much further back than my poor baby’s 3 week pukefest. There are roots in my experience of his birth, by caesarean section which, for the record, is major surgery and for me was completely terrifying and disempowering.

There are roots in the discovery of the ‘complications’ that led to the section being the only safe option left on the table for me. Trying to breathe and smile through scans where midwives said things like, ‘OK…so I’m just going to get a doctor in to have another look at this.’ Nodding dispassionately at doctors who don’t mince their words and explain exactly why this particular condition means they’ll have to have multiple pints of blood in your type on standby due to the risk of haemorrhage.

There are roots further back still in the 2 early miscarriages I had to muddle through in the preceding year; a perplexing walk through shock, disappointment, anger, weariness, at every scan digging my nails into my husband’s hand, hope rising and falling again.

It’s fair to say the last 2 years were not what I was expecting when we decided it would be great to have another baby. None of these things in and of themselves are massively traumatic in the grand scheme of things and the suffering that many people bear. But what was happening was a slow dripping tap gradually filling up all my spaces with anxiety until I was so deeply soaked in it I couldn’t feel much else.

I told a friend, ‘I have moments when I can remember what it felt like to not be anxious all the time but I have no idea how to get back there.’ My body had been existing in a state of heightened adrenalin for such a long time its baseline had recalibrated and it was forcing my mind to seek out things to worry about in order to feed its addiction.

It was only after I had taken the decision to reach out and ask for help that I discovered by chance an article about research into postnatal anxiety, a phrase I had never come across in my life. No one ever asks about it. I’d never before heard it suggested that the hormone circus ravaging your body and brain when you’re making a new human could accentuate anxiety, only depression. I sent the link to my therapist friend who had been helping me make sense of things and signed the message off ‘I didn’t even know this was a thing!!!!!!’ Knowing that it had affected enough other women to have a name wasn’t enough to fix it of course but it did give me a sense that, like cracked nipples and blocked ducts, this too shall pass.