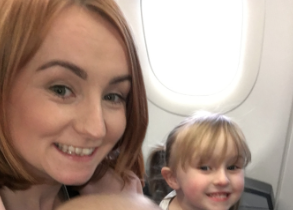 I’m not sure where I have been, only that it has been clouded in darkness. My memories are fuzzy like I was looking out of a pair of dark lenses and my only senses that worked are those of my feelings. My feelings engulfed me, I lived only through them. They controlled me. However I can’t blame them. They were being controlled by something else. They were being controlled by the beast that is postnatal depression (PND).

I always wanted children, I dreamed of the perfect life my little family would lead. Me, my husband, and two adorable children to give all our love too. So at the age of 24 and after 2 years of ‘not trying but not not trying’ I was over the moon to find out that I was pregnant with the little girl I had always dreamed about.

My pregnancy went well, better than I expected, but when the moment came to give birth, everything turned for the worst. I had planned a peaceful water birth. I now realise that ‘planning’ your birth experience is one of the most unrealistic ideas out there. You can’t plan this shit, your body and baby will do whatever the hell they want, and you, as the alien carrier, have to do whatever necessary to help get them out.

My little one decided she would come out with her fists in her face. This meant that unfortunately with her arms and head coming down the birth canal at the same time, she got stuck. My peaceful water birth was quickly evacuated when my little ones heartbeat stopped over 24 hours into labor. Alarms rang, doctors, midwives and reception staff rushed into my room from all corners of the delivery ward. My body wasn’t my own, right then I was a piece of meat, being cut (with no pain relief) to free the baby I had been waiting on. There was no welcoming cuddles, instead my baby was rushed out of my room while a tannoy announcement of ‘resuscitation’ echoed through the halls. I lay on a slab for a bed, pain and exhaustion running through my body thinking, this is it, this is what it’s like to lose a child. I’ve lost her.

I’m not sure how long my baby was away but in time she was brought back to me, breathing and alive. They lay her on my chest but instead of feeling relief, I felt fear. I put on a smile and an act, ‘phew she’s back’, but in my mind I was thinking what the f**k is wrong with me? We have gone through that and all I can think is I’m scared of this child? Where are those feelings of love?

Looking back this is where PND came into my life. It was like she was trailing the halls of that labor ward looking for a weak women to prowl on and she found me. Exhausted and scared she knew I was an easy target.

And since then she has controlled me like a puppet with her ragged dirty fingers twisted in my bones.

Admitting you have PND can be scary as hell, especially due to the stigma attached to this illness. For me it was almost near impossible.

Growing up in Belfast, mental health is something I found to be frowned upon. We joked how when someone loses the plot they need to be ‘signed into flat 10’, the famous mental health hospital attached to the Mater. If we found out that someone had actually been admitted there we ran away from them as if they had the plague. Growing up people recognised for having mental health issues were either known because they committed suicide or because they had hurt another person.

And PND seemed to be even further frowned upon, because that meant you were a bad mother and social services would be around to whip your children away to a better home. Right?

All in all I would have rather cut my tongue off than admit how I was feeling.

So I suffered in silence.

And it was easy to hide because those closest to me lived in Belfast, while I now lived with my husband in England. But that only made it harder for me.

I found being a mother so hard and so unenjoyable because of my anxiety. My daughter suffered from extreme silent reflux and screamed constantly but rather than accept that was the problem PND blew it up.

First it was she hated me. “She’s crying because I’m such a sh*t mother.”

Next I thought I was hurting her. “Maybe I’m doing things and I don’t know”

At one point I believed she was possessed: “The devil or a ghost are in her”.

Looking back the things I thought were absolutely crazy, but that’s what PND does. She twists your reality to make you believe that you are living in hell.

As the years rolled on I eventually got better, though I never went back to the old me. Anxiety still gripped me, I stopped doing things I used to enjoy, I lost a lot of friendships and nearly lost my husband. I was filled with more anger and fear than I was love.

Three years on I still believed I was a horrendous mother, so bad that I never wanted to have anymore children. But fate had other plans.

And all hell broke loose.

There was no way in hell I was good enough to mother two. Fear consumed me. So much so I booked myself into an abortion clinic.Thankfully I came to my senses one day before my appointment. The thought of getting rid of a child made me feel sick. I knew it would only make my mental health worse.

So we went ahead.

I prepared myself for the worse. I knew how bad I could feel and I didn’t want that again, I was only starting to feel better. But rather than talk it through with someone, I hid it again.

I didn’t bond with my baby during pregnancy, I was too scared too.

I didn’t get excited about its arrival like I did my first, instead I set up plans. Plans of how I could be a better mother, plans of how I wouldn’t go down the rabbit hole again.

But as usual these plans mean nothing.

I give birth for the second time to my beautiful son. This time labor went amazingly and the joy that I had finally done something right made me shift to cloud 9. ‘I’ve got this’ I thought. I realised that this time I did love my child. He didn’t cry when I held him, maybe just maybe this one loved me.

But two days later, the dark clouds came. My son ended up back in hospital due to an infection and the fear that I had hurt him came back.

I was a sh*t mum that’s why he was in there I thought.

My mood plummeted, panic attacks set in. All I could think about was escaping, finding a better mum for my children and then disappearing. Perhaps dying. I wasn’t good enough for this world.

But I wanted to be.

So this time I began to talk.

First to my mum, who confided in me that she herself had suffered from PND. Then to my midwife.

From that moment I have had a team of people looking after me. It’s not been an easy journey, I found it very hard to find the confidence to be a mother, and had to return to Belfast, leaving my husband behind, to receive the family support I so desperately needed to get better.

So where am I now?

This illness is so smart, in order to get better you need support, but she will do everything to make you feel alone and isolate yourself.

That’s why it is so important to talk.

And thankfully I have made sure to do that this time around.

I’m now 8 months into my recovery, which includes medication and therapy, and I am finally starting to see glimmers of the old me.

I finally feel like I’m awake and can see the real world. I actually enjoy being a mum now and am able to see that I’m not a shit mum, just a very caring and scared one. The anxiety is still there but with the help of therapy and the support of my loved ones I’m able to control it better.

And most of all.

I don’t want to disappear.

I now work to raise awareness of PND and dispel the stigma of the illness by talking openly about it through my blog and peer support. I don’t want another person to hide the darkness they are living in. PND is one of the biggest killers in the UK, and it doesn’t have to be.

Talking has been my greatest savior and it can be yours too.

Just reach out, there are so many of us fighting this, you are never alone. PND isn’t a weakness to be shunned, I’ve begun to realise that it makes us strong women and mums. How else could we fight the bi*ch trying to suck the life out of us?

And I’m going to do everything to make society see that.