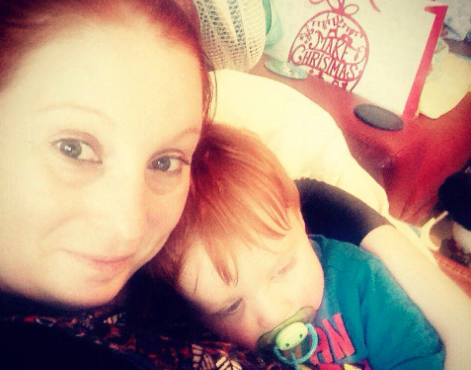 A couple of weeks Ciara O’Brien shared her PND story with the Irish Independent. I was so excited to see it featured, as every brave story helps to raise awareness. I’ve managed to track her down and she has kindly agreed to share her experience with us here too! Thanks, Ciara! When my son Jamie was born, I couldn’t believe the special day was finally here and I was finally a mother. I had wanted this moment for so long.

When myself and my partner Stephen got engaged in October 2012, we started planning the wedding immediately but, after Christmas that year, all we could think about was having a baby – so we started trying straight away.

Actually getting pregnant took considerably longer than we had expected so, when almost a year had passed by without a positive result, we simply ached for that blue line. But on 5th December 2013, our dream became a reality, I was pregnant!

At the time, I thought a lot about what it would be like on maternity leave with my little one. I imagine I was creating what most first time mothers do, some sort of “Stepford Wives” fantasy. Lazy snugly mornings, meeting friends for lunch, mother and baby groups, just out and about with my new arrival, bonding and enjoying life. In reality, it couldn’t have been more different.

For me, the first feelings of guilt started in the delivery room. I was 10 days over and was brought in to be induced. When the midwife broke my waters, I was told that I should make myself comfortable because it was likely that I’d be there for a long time as I was only 3cm dilated. But that wasn’t the case and I felt like I had no time to get my thoughts straight before the incredibly intense contractions began. When the midwife came to check on me less than an hour later, she discovered that I had basically gone from 3cm to 9cm and it was time to get to the delivery ward.

In the midst of labour, between contractions, I was told that the baby was reverting back up inside me and things were getting complicated. At one time I heard “baby in distress” and I opened my eyes to a room full of doctors and nurses. Nobody told Stephen anything so neither of us knew exactly what was happening other than I wouldn’t be able to deliver the baby without help. The result was that I had an episiotomy and my baby boy Jamie was helped out by vacuum.

I hadn’t planned on breast-feeding my new baby. I had told countless midwives that I hadn’t decided on my method of feeding just yet because the judgement was so bad, it was just easier to lie. People have asked me for a reason and you try to come up with excuses but bottom line is that it just wasn’t for me. Yet, when I actually held Jamie, I just thought ‘sure I’ll give it a go’.

But when it came to doing it by myself – that’s when the trouble started. I thought I was doing it right but Jamie wasn’t latching on to my breast correctly and after a few hours I was in a lot of pain. When I asked the midwives if it should hurt this bad, they told me that it should – at the start – and so I didn’t say anything more. The truth was, I was in so much pain and I cried and cried thinking it would get easier until one night when I had fed Jamie I noticed blood all over his mouth. I was so scared that something was wrong with him, I screamed out to the nurse who calmly informed me that it was me that was bleeding and not Jamie. I was in an awful state and broke down crying, telling the nurse that I just couldn’t do it. But she just placed Jamie on my other breast and told me to get on with it.

When Stephen came in the next morning, he noticed Jamie was a bit jittery and mentioned it to the nurse who checked Jamie’s blood sugar, which was very low. I hadn’t been feeding Jamie correctly and he wasn’t getting what he needed. I asked for a bottle straight away and knew my breastfeeding days were over.

When we arrived home with our little bundle, the guilt had well and truly sunk in. In my mind, I couldn’t deliver my baby safely and I couldn’t even feed him properly, to the point I was making him ill. The seed had been planted: “You can’t do this”.

For the next few weeks, that voice just got louder and stronger. I couldn’t do anything right, I didn’t trust myself to know what was right for my son. Jamie had reflux and a lazy bowel which made for a cranky baby, all of which I blamed on myself. I cried every day, sometimes all day. I was supposed to be on top of the world, this was meant to be the happiest time of my life, but all I wanted to do was hide in bed and let someone more capable look after Jamie. With the reflux, Jamie cried a lot so I felt I couldn’t leave the house with him. If he cried while I was out, I felt everyone was looking at me like I was a terrible mother who couldn’t soothe her baby or I was just leaving him to cry. The alternative was being trapped in the house feeling alone and lazy.

Doubt and fear filled my head and dragged me down to a place where I stopped eating, stopped showering, stopped sleeping. Stephen would rush home from work every day, excited to see Jamie and I, but every day he came home to find me, a sobbing mess, which of course also made me feel even guiltier. I was convinced my friends would drift away now that I was a “boring mammy”, I often thought ‘how have they had put up with me for as long as this?’ Any positive thoughts got twisted in my mind so much that soon there was only negativity.

The intrusive thoughts arrived with a bang and wouldn’t leave me alone: thoughts of not being here, not necessarily wanting to die, just not being in the hell that was my own mind; thoughts of running away because I was so terrible that I was certain Stephen and Jamie would be better off without me. I had it all planned out, I’d put Jamie in his moses basket while he slept and I would run – I didn’t know where – but when I was far enough away, I’d call someone to tell them to go to Jamie and then I’d keep on running.

I’ve had thoughts of harming myself, just so that I’d be in hospital and would get a break and be able to sleep and “it wouldn’t be my fault”.  Not all thoughts were that extreme… I remember sitting watching the lashing rain through the window and thinking I’ll just go walking in it and hopefully I’ll get the flu. I got horrible panic attacks that would strike for seemingly no reason. And just despair, a dark cloud that was weighing me down and robbing me from enjoying this precious time with my son. I lost my identity and sense of self. I didn’t know what it meant to be a mother, I thought I had to change who I was and I didn’t really like that person.

I knew I couldn’t continue like this, so I went to my GP and told her everything. After a lengthy discussion, we decided on medication and talking therapy would be the best course of action. She placed me on the public list for counselling and said I would benefit from CBT down the road. She advised me to pay for private therapy session until I got a public appointment as I was in dire need.

I started seeing a therapist and just saying all the things that I was too afraid to say out loud. It was a safe space where I wouldn’t be judged. Therapy is different for everyone but I find it invaluable. I’ve being going for about 18 months now and I have come a long way. Panic attacks are few and far between, I still have anxiety but on a much more manageable level. I no longer have those intrusive thoughts which I was convinced would never leave me.

I’m still struggling and I still have hard days. But sometimes I can see how far I’ve come and how better things have gotten. Those around me can see this difference a lot more than I can. One of the most important things I’ve learned through this is that you must take care of yourself, it’s not selfish – it’s a necessity. You can’t look after your family if you don’t look after yourself. Take time out for yourself, do things you enjoy, even if it’s an early night or a long soak in the bath. And although it may seem wrong or selfish, self-care is essential to your wellbeing.