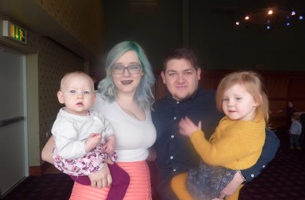 My name is Aisling Cooper. I have 2 beautiful daughters, Mia, 4 and Robin, 11 months.

My Journey with Postnatal Depression began shortly before my first daughter was born. In hindsight I didn’t see it but looking back I can recognise the signs of it beginning now. I struggled badly through my pregnancy with Mia with morning sickness and physically was in a lot of pain. As the pregnancy went on I struggled physically with moving around and it took its toll on me mentally. As someone who likes to be moving and doing things it was a real struggle to not be able to do this.

Finally, on the Friday the contractions started, they came on and off the entire day, we went to bed and they eased off. By Saturday I made my way to the maternity unit only to be sent home and told to come back when it got to sore. Then came the delivery which didn’t do smoothly either, I was totally drained and exhausted, they broke my waters and still no progression. I was placed on the drip and the epidural was started. It wore off after an hour and none of the staff was listening to me, while I tried to explain that I could once again feel all of the contractions, after a while of pushing they took away the gas and air as they told me it was making me drowsy. By this point I was so worn out I was falling asleep mid contraction and physically just couldn’t push anymore. The doctors came in and aided me in delivering Mia via vacuum, once she was delivered and they did their checks and began to give me stitches was the point they realised that I was feeling everything and finally gave me something to numb it. I didn’t care anymore, I was totally infatuated with Mia that the pain was somewhere in the distance. This time I was placed in a side room and comfortable, I had the space I needed and could breath. Breastfeeding was going as planned and although quiet and bit lonely away from my family I was much more comfortable. I was so afraid of the anxiety creeping back but I didn’t feel that overwhelming fear this time around. Soon we where off home and I waited for it, I waited and waited but thankfully this time around the panic hasn’t been there. At least not above the normal mother worries.
Once Robin turned 6 months, I started to see the psychologist. She has been a life-line and made all the difference to my recovery. I finally had someone listening to me and giving me advice on how to cope. Soon my panic attacks have started to reduce and my anxiety attacks are less and less frequent.
I have begun to write about my experiences also after coming across Lindsay’s blog. We need to keep talking, until we are blue in the face and then we talk some more. It is so important to break the stigma.
Thankfully almost 1 year after Robins birth I am feeling much more secure in myself and my recovery. I know I am not finished yet, It was always be a part of my life and I will have many ups and downs but I can always crawl my way back to me.