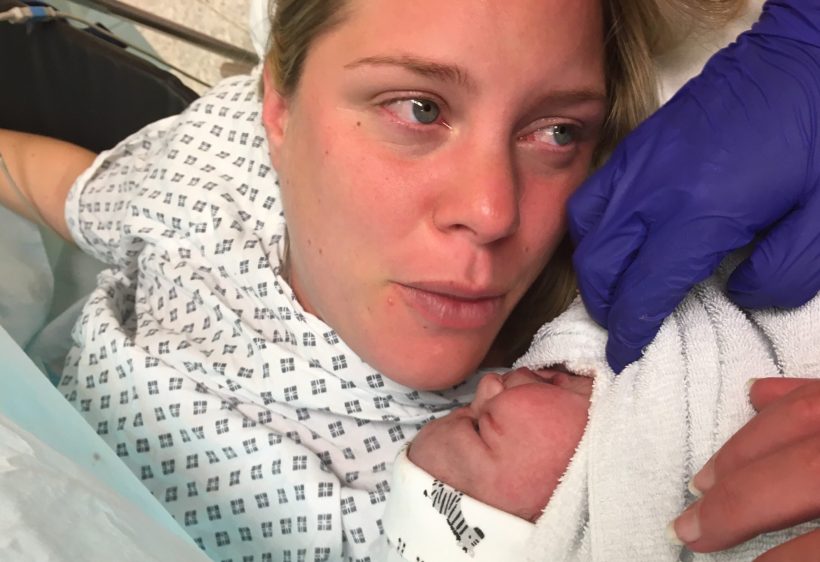 All I wanted was to have a baby with my husband but the moment I found out I was pregnant, I really freaked out.

I had an unstable, freelance career, and spent most of pregnancy in an angry fight with my current employer to secure maternity pay. I never stopped much to think about the fact that I was having a baby – I just felt very scared that I would lose my job, and, ultimately, myself. I tied myself in knots worrying about what the future looked like, where I would work, where we would live, but strangely never pictured my baby there.

Looking back it seems so obvious that I was very depressed, but at the time I thought that it was just the stress of morning sickness and my job troubles. I had no doubt that as soon as my baby arrived, I’d fall in love with him and everything else would melt away into insignificance.

Spoiler alert, it didn’t! We moved house about 4 weeks before I had my son, and already I felt a strange sense of unreality. I was induced 2 weeks after my due date and the whole sorry affair ended in an emergency C-section about 3 days later.

Until the section, I thought I was coping quite well, but as I was wheeled down to surgery I began shaking uncontrollably. I became utterly convinced that I would die on the operating table and that they’d accidentally epiduralled my lungs (this isn’t a thing!) In reality, I was having a panic attack, and completely switched off as my baby was born. It felt as if I wasn’t really there at all. In fact, there’s a photo of me as he was put on my chest, and I really think it’s the exact moment that I lost my mind. My eyes are red and watery and I’m looking manically towards the door as if I could make a getaway.

My son was taken straight to the neonatal unit because he’d picked up an infection and I was taken to the postnatal ward, to get zero hours sleep and spend the night convincing myself that none of this had actually happened.

When I finally saw my baby the next morning, he was wired up in a plastic box and I had this overwhelming feeling that he wasn’t mine. Not that any other baby was mine either – more that I hadn’t really had a baby and I was having a really trippy dream.

I had enough insight to know that this couldn’t really be the case, but the feeling was overwhelmingly strong. I felt nothing for this little boy – nothing good, nothing bad. He was just an object in a box.

After another night of zero sleep, I begged the staff to discharge me the next day. I remember going to say goodbye to my baby and having the most horrifying thought – ‘I don’t want to take you home. I could leave and pretend this never even happened’. I felt like there was nothing stopping me from leaving him forever, and it absolutely terrified me.

Over the week I dutifully dragged my body back and forth to hospital, tried to express milk and look like a doting mother. But my soul had checked out. By the time we brought him home, I was a robot. I could change him, feed him, burp him but the only comfort I had were moments when I’d forgotten I had a baby. Everytime I remembered again, I used to cry and feel so scared that my mind was playing these tricks.

Breastfeeding didn’t work out, because by that time I was pretty much suicidal. Even holding my baby made me cry hysterically, and I figured that if I did kill myself, I didn’t want him to be dependent on me for food.

At the heart of it was an all-consuming shame that I couldn’t love my own child. I had thought that it would just be a given, you know. All mums fall in love with their baby instantly don’t they? Regardless of anything else going on, it’s just a biological fact right? But I couldn’t. I wanted to love him so much. But it was like my ability to love anything had just disappeared, and been replaced by a big empty black hole. I looked at him and felt like we existed in different worlds – I just couldn’t get through, and couldn’t shake the feeling that I was in a dream and none of this was real. I used to beg my mum to adopt him, so that he could be loved like he deserved.

Things came to a head when he was about 10 weeks old. I’d already started on antidepressants and was seeing a therapist, but if anything I was feeling even worse (a common effect of starting AD’s). I’d started having horrible intrusive thoughts about my lack of bond with my baby. Maybe I would hurt him when I was putting his clothes on because I wasn’t careful enough. Maybe he would drown in the bath and I wouldn’t save him because I was so unloving. Maybe I would drop him down the stairs because he felt like a doll and not a human to me.

I, foolishly, went to a Christmas meet up with my antenatal class and it crushed me. They were all breastfeeding, and all laughing about ‘normal’ mum problems – lack of sleep, poo explosions and I remember thinking – it’s all worth it for you isn’t it? The love outweighs everything else for you. It felt like they all had this secret knowledge that I didn’t, this ‘real’ mum-ness, this magic that I was missing.

That night I didn’t sleep and the intrusive thoughts got terrible. That I would harm him on purpose because I didn’t have any ‘maternal instinct’. That I was being punished because I worried too much about my career when I was pregnant. That he would die and that would be my punishment for not loving him enough. In the morning, my husband went to work (unaware of these demented thoughts – I always did a pretty good impression of my ‘normal’ self, even when I was very ill). I sat feeding my son in bed and my blood ran cold. I could literally kill him. What if I did? I didn’t want to but I wasn’t me anymore. How could I trust myself with him?

In utter panic, I called 999. I told the operator that I was worried I’d hurt my baby and I needed them to lock me up to keep him safe. Then I hung up, took my baby downstairs and huddled in a ball under the kitchen table, with him in my arms, until the police knocked on the door. The sheer relief I felt when I opened the door, and gave the police woman my child. At last. The jig was up. I wasn’t fit to be a mother, he was safe now, and I could disappear into the ground.

That was really the start of my recovery. An ambulance was called, and my mum went with me to hospital while my husband stayed with our son (I later realised that no one was ever concerned about my son’s safety, only mine). I saw doctors from the specialist perinatal team, who were so kind to me – I don’t think I’ve ever felt so grateful for kindness. They wanted to admit me to a mother and baby unit, but I still felt terrified of hospitals, so they agreed to treat me as an outpatient as long as I had support at home.

Even on the lowest day of my life, I remember feeling a glimmer of hope for the first time. I was ill, they would help, I would get better. It didn’t have to end badly.

And it didn’t end badly. It was a very long road, as most other sufferers will agree. There’s no quick fix when it comes to PND. I saw a psychiatrist and was prescribed more medication. I saw a CPN daily for weeks, and had two different types of therapy weekly. I also had intensive help with bonding with my son, and slowly learnt to be less afraid of him. The perinatal team were outstanding, like amazing cheerleaders willing me to succeed.

Without me even realising, I became more attached to my boy. I started looking forward to seeing him and playing with him. I started noticing how cute he was and all the funny little things he did. It was a real slog, especially at the beginning. Each day seemed like a monumental challenge, and my world seemed very small and fragile. But over the months, I began to start enjoying living again, and feeling as though I had confidence in my own parenting. I found a new job when my son turned one, and that really helped me to feel as though things were clicking into place. That I could be a mum as well as my old self. That I could be all these things at the same time.

My son is now 20 months old, and I adore him. He’s silly and gorgeous and all mine. I still have wobbles, and fall into old habits – questioning our bond, and comparing myself to others. I have to keep a tight control over things like sleep, exercise and alcohol because it doesn’t take much to tip me into a bad place.

But in some ways I feel like an absolute Greek god for getting through this. Every part of me was cracked apart by motherhood, shattered into pieces that I thought I’d never get back. But I got them back, stuck them back together, and made something more beautiful than I’d ever had before.

Huge THANK YOU to Hannah for sharing her story and experience with us all.

If you are struggling, please know that you are not alone and that there is help and support. Links to help and support HERE or contact your GP, Health Visitor Or Midwife.

If you’d like to write for us please email haveyouseenthatgirl@outlook.com