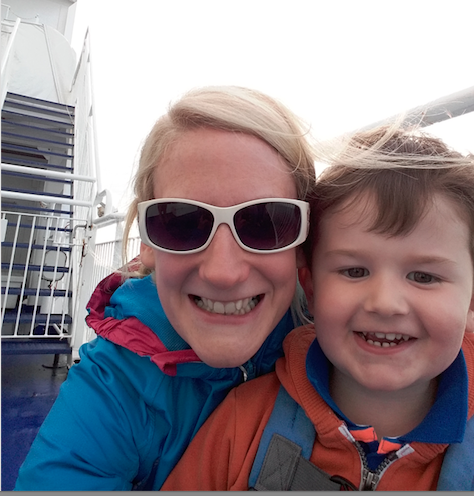 Before I met Gavin I lived on my own – in England and in Belfast. I enjoyed it. It was a great part of my independence. So much so, that when we got married I had to learn quickly how to share space – I don’t think I’m alone there!

That’s all changed, thanks to my struggle with Postnatal Depression. Each Sunday night, as Gavin packs his bags to head off for his working week in London, Reuben’s little face asks me this question:

“But who’s going to look after us, Mummy”?

I always reply with – “I’m going to look after you, Reuben”… which in turn is met with

It always breaks my heart a little. Postnatal Depression has absolutely rocked my world.

I became so ill that I was genuinely terrified of my life altogether. My loved ones, in turn, became frightened for my life.

The truth is, my family came to the decision that I shouldn’t be left alone (i.e. just me & my little one). It wasn’t safe for me. It wasn’t best for me, it wasn’t best for Reuben. I can’t say that I disagreed – in fact I was almost relieved. I knew that not being alone meant that someone was there “should the worst happen…” and that certainty made my uncertain further easier to face.

What do I mean “should the worst happen…”? Well, my mind was an absolute mess. On many occasions I wanted to give up on life altogether – with someone around that choice was harder to make. At others times, I seriously considered packing my bags and never coming back – I had no idea where I was going but being alone, in the world, seemed like an absolute relief. I sometimes lay in bed, in the middle of the night, planning my escape. I believed this would be the kindest thing I could do for those around me.  Other times, I wanted to leave Reuben planning (safely & happily) in his toy room, go upstairs and lock the bathroom door and lie in a ball on the floor. I needed someone around to help me, when those urges and desires were hard to resist.

I have lived in constant fear – battling it every second of the day: I was afraid that someone was going to “come and get” Reuben and I, to do us harm. I mused over whether I’d be able to protect him, would I have to give my life for his, how would we escape etc…constantly.

I was afraid that Reuben would die in the night – that haunted me and to be honest sometimes still does. I also worry that he’ll take seriously ill in the night and (being the “useless” mum that I am) I won’t be able to help him.

I worry that I might die. To be honest, that has seemed like relief to me many times but I couldn’t imagine what would happen to Reuben if he was to wake and there was no one there to look after him – how would anyone find out, how would he raise the alarm for help? Again, that’s a battle I still play in my mind.

These fears have crippled me. To the point that being alone at night meant I didn’t sleep. For one of two reasons – either I choose not to, “incase” one of the above took place or I just couldn’t because my mind and body would not switch off. Even with someone beside, Gavin or a family member, I still found sleep very hard.

Gavin’s job means he has to be away Monday – Thursday, many weeks, in London. He’s a flight away from home – so can’t be called on quickly. That’s not a complaint, it’s just fact. It’s part of the job. But it’s been very hard to manage with how ill PND has made me. I couldn’t be left alone. So my lovely mum and dad (and aunt) have come to stay with me during the week. In fact, for the first 9 months (after diagnosis) I used to leave our home and go and stay at my parents. When I was at my very worst my mum used to sleep in the bed beside me, as I could not be in the bedroom alone with Reuben. So much for capable, independent women right?

This is really hard for me to share. It’s one of the most vulnerable parts of my recovery. The truth is, while I have come on leaps and bounds in other areas, this part is very slow. I decided to let you all in on it, as I know that many of you are also struggling with big issues and you feel like there’s no end to them. I wanted you to know I’m here with you too. You are not alone. I’ve tried to be as authentic as possible, speaking out about my journey with PND and this seemed important to voice to you all.

Here’s another secret – I feel so very disappointed with myself, over this aspect of my life after PND. I absolutely hate how it’s left me and the constant battle I seem to wage with it. I realise that it may seem, having been so open with my journey, that I’ve gotten over much of the stigma that surrounds it. In some ways I have, in others it still haunts me too. I feel less of a “modern women”, incapable of being “normal”, a burden and also a lot ashamed. But I have to remind myself it was the illness (untreated for 2 years) that got me to this point – it’s not my fault, it doesn’t define me and I don’t need to be feel shame. But I do. That’s the bottom line.

I also really want to see this area of my recovery change and move forward. For me, for my sake. It matters to me that I “beat this”. But it’s very slow. It’s literally baby steps. I am now normally okay during the day (even for quite long periods) being on my own but night is a very different story. But we have a plan and I am determined that someone day I will not be at this point – how long it takes to get there is a complete mystery.

So when my lovely little Reuben looks at me, with his innocent eyes, and asks me, as a matter of fact, “But who is going to look after US…?” it cuts right to my heart. On some level he gets that when Daddy is not here then Mummy needs help, Mummy needs someone to look after her too. This isn’t what I planned or imagined when I was getting ready to be a parent. I had no idea a mental illness could be this debilitating. But it is, it has been and in some ways it continues to have power and control in my life… for now.

Boy, do I hate Postnatal Depression.