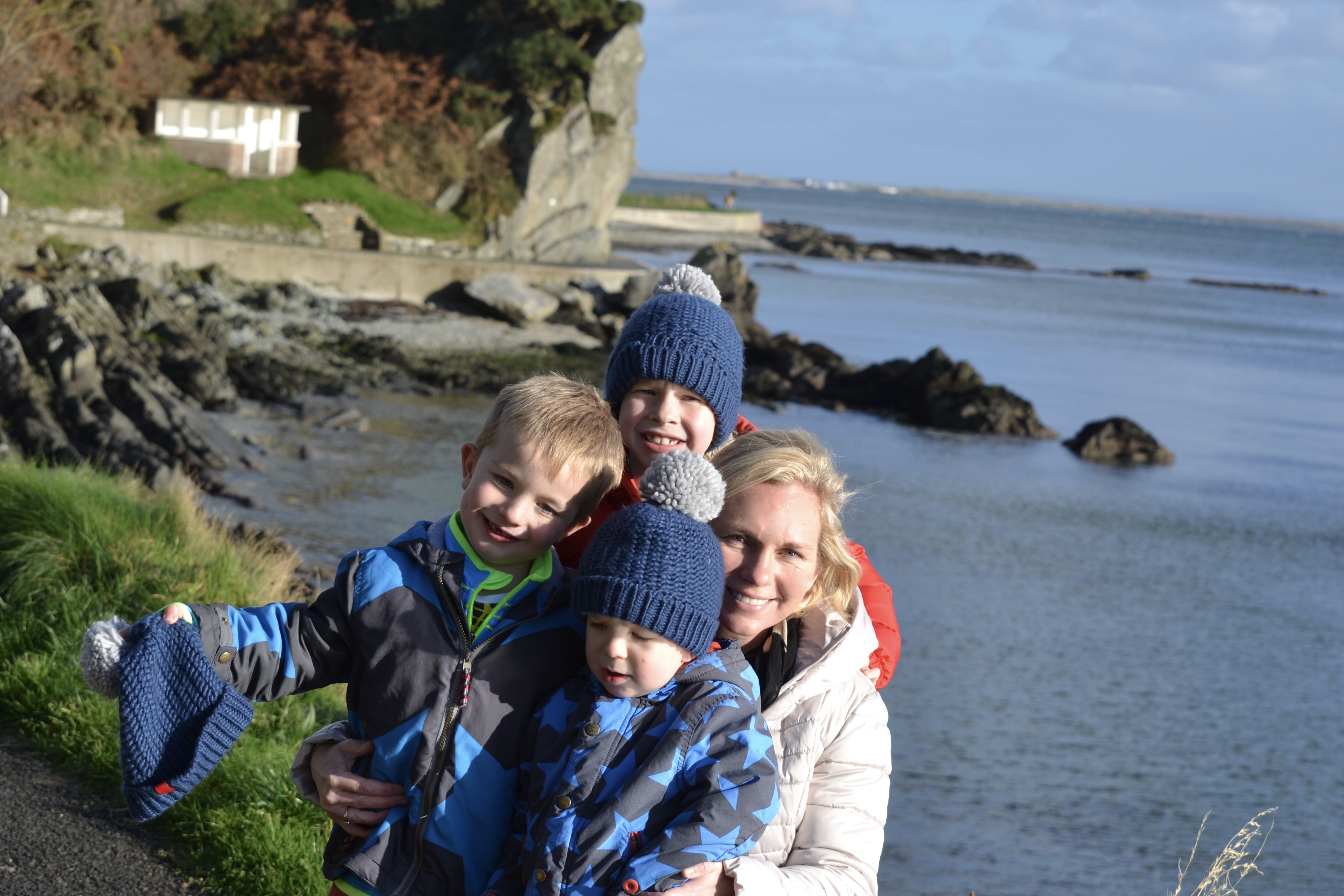 As I woke up in a ward surrounded by chattering women, the friendly girl in the next bed looked at me and asked “How did Matthew do in the night?”. I looked at her blankly. Who is Matthew I thought. Matthew was the little, squishy baby in the cot next to me, he was mine. I suddenly panicked that I didn’t like his name, it sounded weird for this baby I’d carried for 9.5 months to finally have a name. I don’t really know how Matthew had done in the night, he and I must have slept well, the labour had gone on for almost 24 hours and in the end an emergency C-Section had been called for. When Matthew was born he was laid on me but I was dizzy and he was passed over to his dad. There are some lovely pictures of them both together to mark the occasion. This became significant to me later on when I couldn’t recall anything of the first hours of his birth and I didn’t have those glowing, just given birth, photos.

As that first morning with Matthew went on I struggled trying to get Matthew to feed, the midwives tried to help but they were so busy. I called my husband and asked him to tell my mum not to come to hospital, I didn’t want to see her. Looking back this was the biggest sign of all that something wasn’t quite right. I always want to see my mum, we speak multiple times each day, she’s my best friend.

The next days and weeks are a blur of visitors coming and going from our home. I wasn’t comfortable feeding in public and I would shut myself away upstairs trying to feed and wind Matthew, who would scream in pain every time he fed, while my husband chatted and served drinks to the well wishers downstairs. Then I remember the women all desperate to hold him. I get it now… who doesn’t love the smell of a new-born baby, now when I see them I pray the mum will let me have a snuggle. At the time I just saw smug women, who had been there and done it and were full of advice and know how about MY baby. I didn’t want to pass him around the room, I was convinced he would like one of them more than me. My husband would insist on taking him round to relatives houses. I understand now he thought he was doing the right thing, giving me a break and some time to myself. But the stress of him leaving without enough blankets or expressed milk and simply just the ache of missing the baby was too much to bare.

It all felt so noisy. Between the visitors, the colic and the torturous crying you set your watch by, differences of opinion (putting it politely), the midwives and health visitors calling it was chaotic. I worried constantly about breastfeeding and if he was getting enough. I cried all the time and I felt physically unwell. It turned out I had developed an infection from the C-Section that went unnoticed for a few weeks. We hoped that once this was cleared up I would be better. During the day when I was on my own I would walk the baby up and down the lane in front of our house, it was the only thing that got him to sleep. Up and down, up and down. I was unable to walk to far from the house, I had to keep it in sight, but sometimes I was unable to go inside. When the baby was asleep in the pram I would crouch in the corner of the garden and stare at the house, it was the only thing that seemed sound and secure. When it was raining (the harder the better) I would curl up on the grass. I wanted to punish myself. I felt trapped, like I couldn’t cope and didn’t know how I was going to handle the burden of this immense responsibility that I had brought upon myself.

About four months in I remember my mum made a lighthearted joke, it was aimed at me and usually I would have laughed and given her as much back. I couldn’t laugh, I couldn’t even smile and I knew that something wasn’t right. I couldn’t find joy in anything. I told her how I felt and then I told my husband. It was then that I first made an appointment to see the doctor. He prescribed me antidepressants and referred me to see the Community Mental Health Nurse.

Things got a lot worse before they got better. Over the next twelve months my mood got lower, I was snappy and angry and my husband struggled to deal with this new irrational and paranoid wife. I was sad and resentful of so many things that were said and done in the early days after Matthew’s birth. I just wanted it all to stop. The noise, the arguments, the feeling of failure, it was all too much. A flippant comment by a health professional about feeding and being on Prozac being bad for the baby broke my heart, I felt like I was living in an episode of Jeremy Kyle. I then had to live with the guilt of stopping breastfeeding when this was the only thing I believed my baby needed me for. If I wasn’t breastfeeding there was no point to me, anyone could be his mum.

The antidepressants suppressed my appetite and it hit me like a lightning strike one day that I could starve myself to death, I could fade away gradually and nobody would notice. And so that’s what I tried to do.

Fortunately, I had the most wonderful CPN, she had built a relationship with me and I would tell her everything and she didn’t judge me. I told her my plan to disappear and all the fantasies I had about the other ways I could do it if that failed. When she tried to refer me to a team that could help they said I wasn’t appropriate for their service. On paper I was a sensible thirty something with the baby blues and there were others that needed the service more than me. This kind CPN argued for me, she could see I was suffering, the weight was falling off me and I was committed to my plan, I was convinced it was best for everyone.

Once I got the help, I worked really hard to get better. It wasn’t just something that happened. It took commitment. I didn’t want to get better sometimes because I still didn’t feel good enough but I had to accept that I was sick. I was suffering with PND. I had irrational thoughts that were caused by a chemical imbalance in my brain. This was brought on by having a baby. It wasn’t me and it wasn’t my fault and if I accepted the help then eventually, while the imbalances may never completely go I could learn to crush the irrational thoughts with rational ones. I worked hard at learning techniques to ensure I could handle difficult situations or be able to notice when I was becoming anxious and work out what may have caused it. It was such hard work and it made me angry that I was having to work so hard at being “normal”! What still amazes me is that throughout a lot of this I worked. I went back to work when Matthew was 9 months old. “We” (mum and my husband had to do my thinking because I was incapable of making a decision) thought it would be good for me. I held down a busy job, managing staff and budgets, and I did it well. Nobody knew I was suffering, I had started a new job so they didn’t know what I looked like before. I could hold it together at work, maybe because it was something I could control and I wasn’t a failure at.

I needed someone to fight for me and I am so fortunate that I had this one special CPN, maybe they would have all done what she did for me but I’ll never know that and I’m just glad she was the one on my side. I believe she saved my life. I have three children now and with every single photo I take of the three of them together I think of her.

The biggest fear I have in sharing my story of PND is that my little boy will one day read it and think that he was responsible for my pain. What I want him to know is that he was  responsible giving me the strength to get through it and be better person for it.

In the darkest days I wish someone with a crystal ball could have told me how things would turn out. Tell me it would be hard but I’d get through it, that my husband would get through it and our marriage would survive . When I was desperately sad because I couldn’t bare to have another baby, I wish someone could have told me I would go on to have not one but two more children and the second pregnancy would be scary because of the fear of what was to come but that I would love every minute of my new babies.

What I needed then more than anything was for someone who knew how I was feeling, (really feeling) to tell me it would all be ok.

If you are reading this because you are suffering right now, please don’t worry, you are doing brilliant and it will all be ok.